🎃 Pumpkin Emoji: Avoid Getting Tricked and Enjoy Treats With This 🎃 Carved Pumpkin 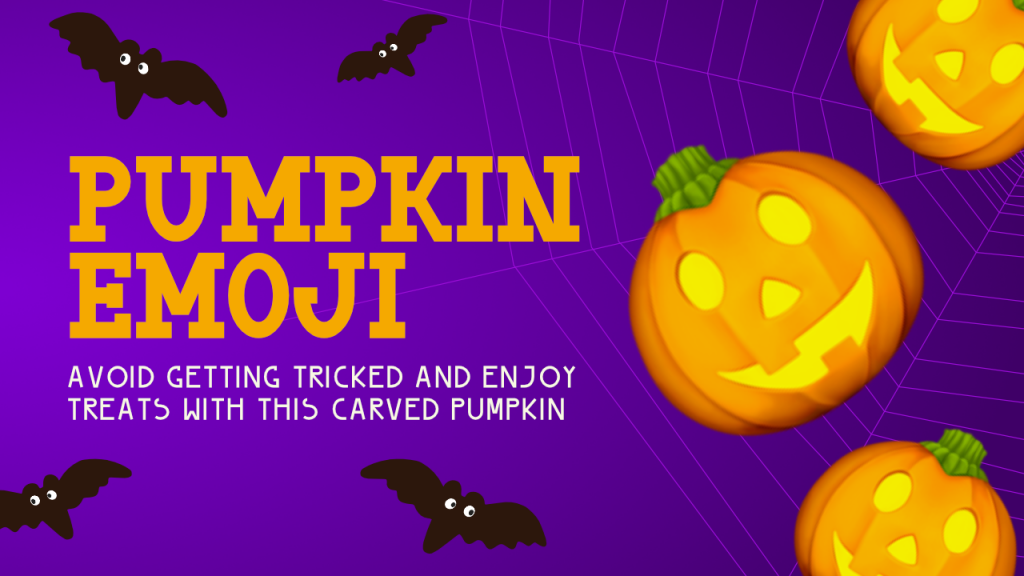 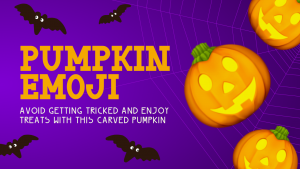 The 🎃 Pumpkin emoji makes an annual appearance on various social media platforms during Halloween. Also known as the 🎃 Jack-O’-Lantern emoji, the animated pumpkin symbolizes the goofy faces carved into hollowed-out gourds we see before the last week of October. You probably include the 👻 Ghost emoji with the pumpkin to add a « Trick or Treat: vibe to your messages or social media posts. Because of its festive use, emoji keyboards offer the celebrated Halloween symbol instead of animating a gourd that looks like an orange 🍈 Melon emoji.

Almost all platforms designed the pumpkin with Halloween in mind. The orange gourds in emoji keyboards all resemble the classic toothy grin of jack-o’-lanterns. For centuries, people love decorating their houses with carved gourds to commemorate Halloween. The display of silly or spooky jack-o’-lanterns invites children and adults dressed up in costumes for Trick-or-Treat. Communities set up different activities for all ages all night long. The eventful evening became a fun bonding time between parents, children, and their neighbors.

Pumpkin Emoji: Meaning and Story Behind The Animated Jack-O’-Lantern

Nowadays, we automatically associate the pumpkin emoji with Halloween because of its traditional role. Once the Halloween season starts, neighborhoods and public places decorate the atmosphere with illuminated carved pumpkins. Before you go looking for candies and other treats, do you know where this all started? Did you know that people originally called the holiday as Hallow’s Eve?

The elaborate holiday we all know and love came from the Samhain, an ancient Celtic festival. Back then, people celebrated the elaborate event every November 1. Around 2,000 years ago, the Celts moved around and resided in Ireland, United Kingdom, and Northern France. These areas played big roles in colonization and the discovery of trading between nations. Because of this, the festival’s traditions eventually spread and mixed with other cultures throughout the world.

Decorating places with jack-o’-lanterns came from Ireland’s tradition. They carved toothy grinned faces on hollowed-out large turnips or potatoes and lit candles inside the makeshift lantern. The Irish who immigrated to the USA continued this practice by using pumpkins and gourds. This influenced other Americans to celebrate every Halloween with intricately designed lanterns.

All available emoji keyboards designed their orange pumpkins as jack-o’-lanterns. They may differ in overall designs but, all developers still had the Halloween decoration in mind. If you hope to find them on your respective keyboard, simply type « Halloween » or « gourd » apart from pumpkin or jack-o-lantern. 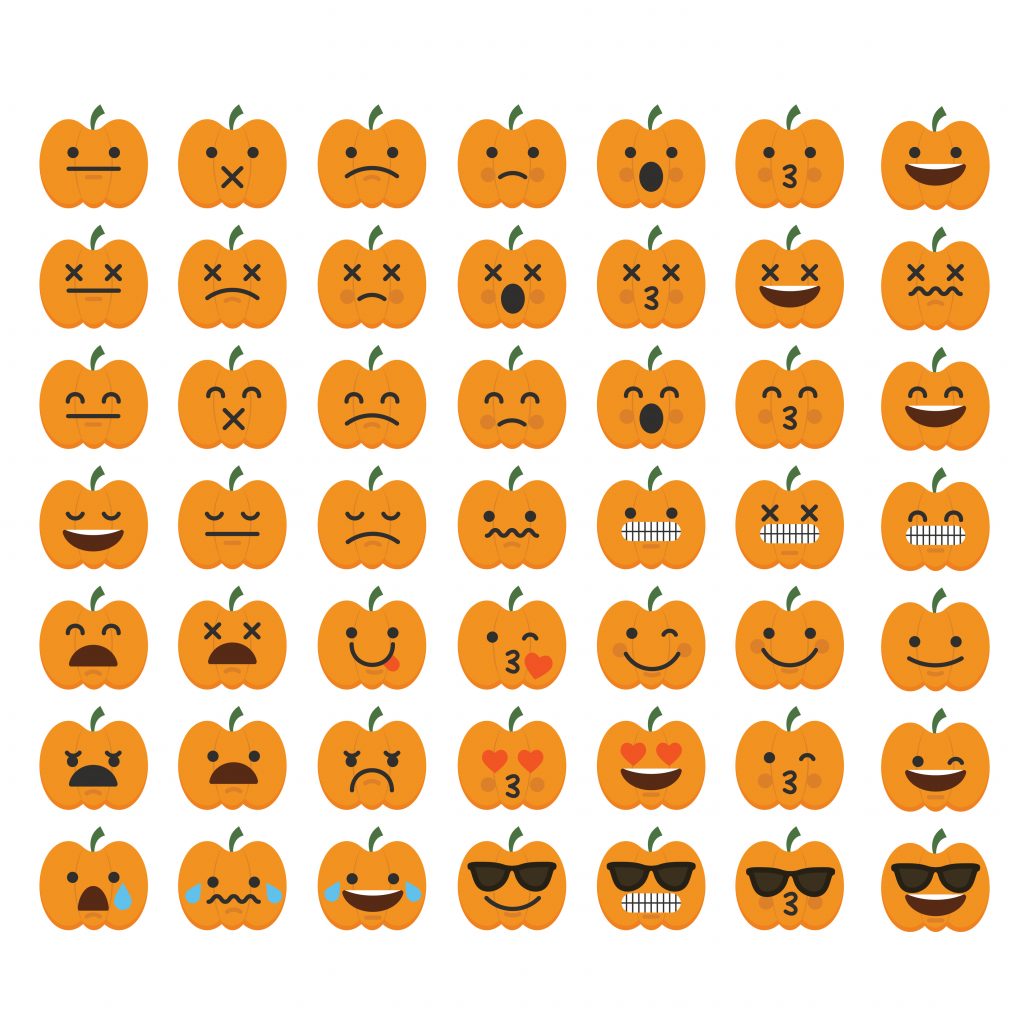 Before the dawn of emoji keyboards, people used an abundance of symbols to convey emotions, things, or events through text messages. Sending texts about Halloween was no easy feat because of the intricate details of pumpkins and jack-o’lanterns. People had to be creative if they want to illustrate the essence of the spooky holiday.

Back then, those addicted to texting kept track of the trend of symbols made to look like the emojis we know today. It’s hard to imagine how people copied or memorized sets of symbols. They needed it to compost messages resembling a pumpkin carving. Here are a few of the symbols sets used to illustrate jack-o’-lantern or pumpkins on texts:

Add a Spooky Flair to Your Posts With the Pumpkin Emoji 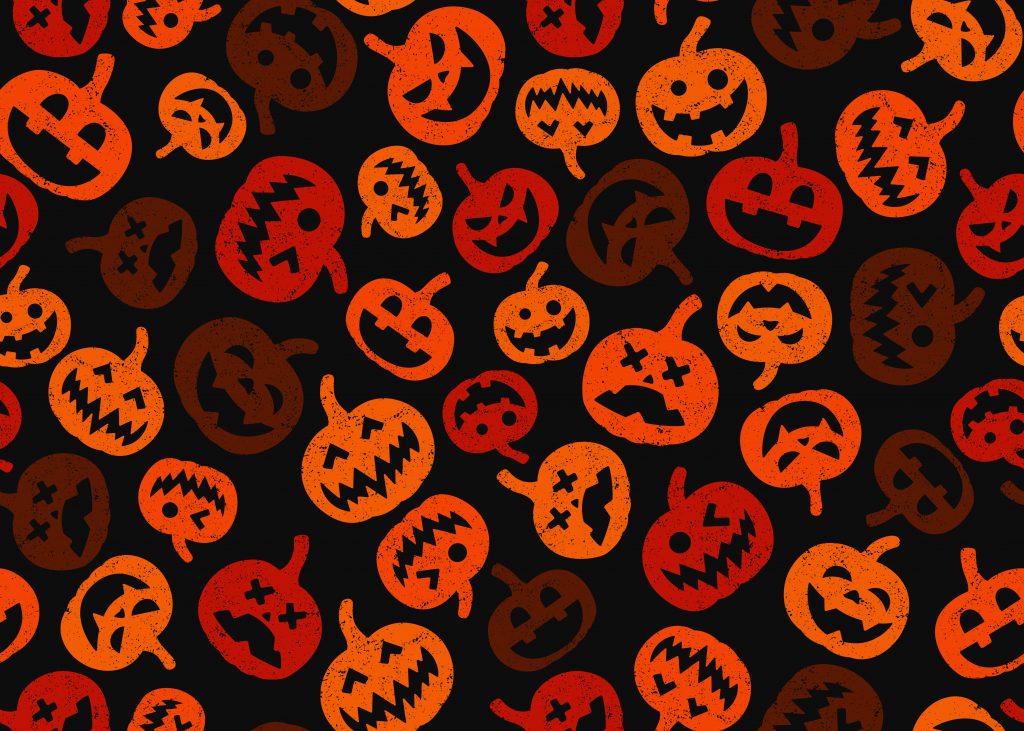 By knowing the background of the beloved jack-o’-lantern, you now know the relevance of adding the animated pumpkin to emoji keyboards. Sending the quirky vibe of the orange gourd reminds recipients of Halloween’s fun traditions. Below is a list of emoji sets that adds more excitement to the spookfest season:

Pumpkins: From Vegetables to Emojis 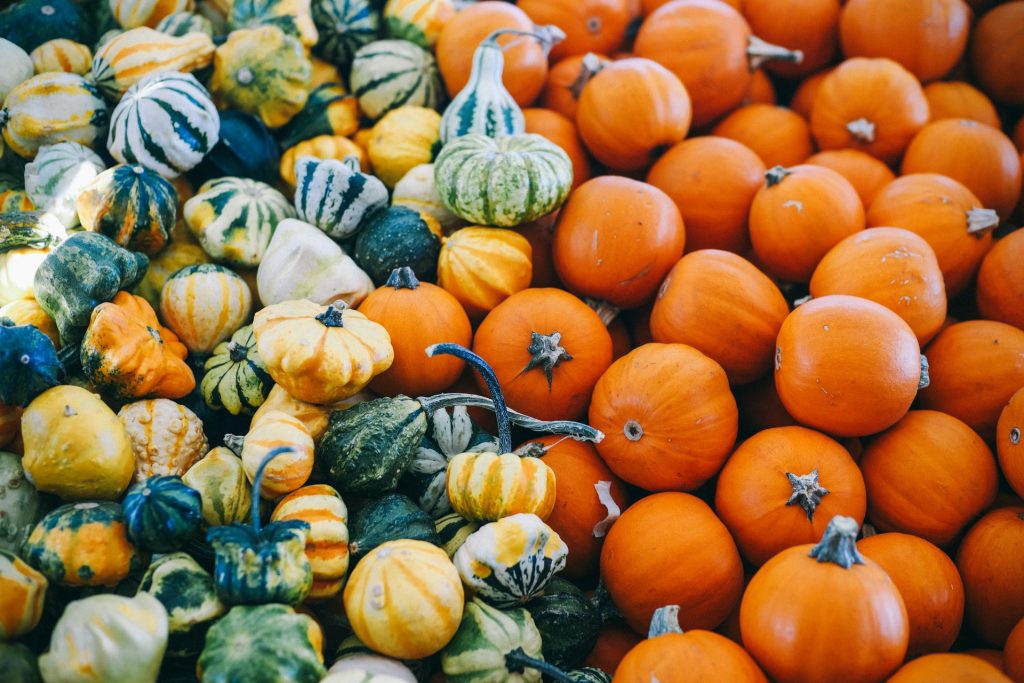 The orange pumpkins we know and love hails from the gourd family Cucurbitaceae. Farmers consider them a winter squash cultivar. They harvest the smooth orange or yellow gourds in September or October. The vegetable develops right before the extreme frosts brought about by cold temperatures. Because of this, people who love to decorate during Halloween have to chance to purchase an abundant supply of ripe pumpkins just before Halloween and Thanksgiving.

The COVID-19 pandemic kept most nations from celebrating the centuries-old tradition of Halloween. During this time, it was hard for families and neighborhoods to bond on the fun-filled holiday. Fortunately, people posted or sent messages filled with emojis like the pumpkin and the ghost to commemorate Halloween. Despite the lack of Trick or Treating, netizens online still managed to keep the holiday alive with fun Halloween-themed emojis.

As we mentioned earlier, the Irish started the trend of carving large hollowed-out vegetables. They used their creations to decorate their surroundings during Halloween. Originally, large potatoes or turnips were used for jack-o-lanterns. However, Irish people who emigrated to the U.S. struggled to find the vegetation they needed for the tradition. Because of this, they eventually popularized the practice with pumpkins which grew abundantly in the country. 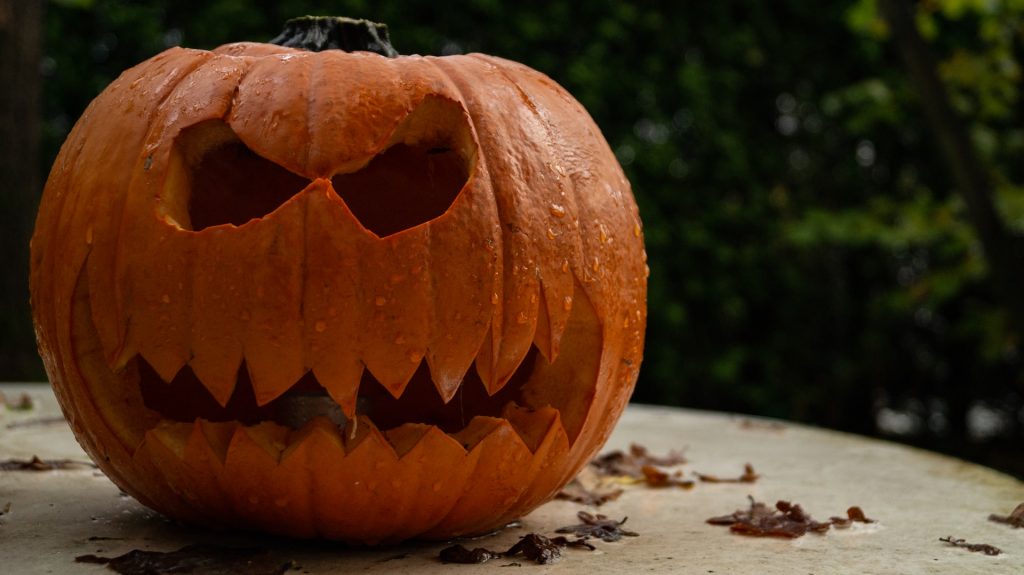 What do you know about the classic toothy-grinned design we carve on hollowed-out pumpkins? Who in history had such a warped face that people believed could ward off evil spirits on Halloween?

The Halloween tradition of crafting jack-o-lanterns followed the Irish myth about a man nicknamed Stingy Jack. Like his nickname, Jack went out for drinks with the Devil with no intention of paying for his share. He then tricked the Devil into transforming into a coin to pay for their drinks instead of using real money. Afterward, he decided to trick his companion by stopping him from reverting to his original form. He achieved this by pocketing the Devil coin with a silver cross at all times.

Stingy Jack finally decided to set the Devil free on the condition that they part ways for a whole year. He also convinced the Devil to not claim his soul if he dies within the said year. Unfortunately for the Devil, Jack tricked him again by manipulating the powerful being into climbing a tree with a carving of a cross. At that time, their deal extended to ten more years.

After Stingy Jack passed away, God rejected the manipulative man’s soul from entering heaven. Moreover, the Devil stayed true to his word and refused to claim Jack’s soul to hell. Because of this, Jack was left with no choice but to wander the night using a carved-out turnip lantern to light his way. The Irish called his ghost « Jack of the Lantern » which eventually became « Jack O’Lantern » and the modernized « jack-o’-lantern. »

Why is the Pumpkin also called the Jack-O’-Lantern Emoji? 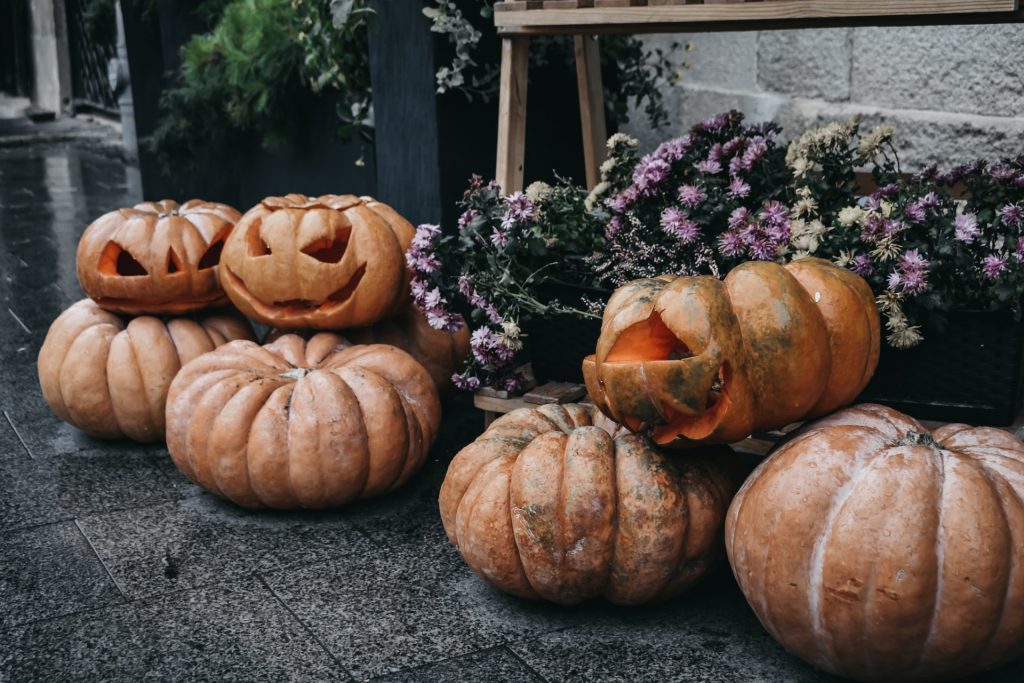 Animating the orange squash for emoji keyboards is a lot complicated than you think. As part of the gourd family, squashes often feature different shades of green as their outer layer. Each animated fruits and vegetables that currently exist in the emoji keyboard are already distinguishable. Because of this, emoji users might confuse a black squash or pumpkin emoji as bell pepper or a melon.

The ultimate decision of designing the pumpkin emoji as the Halloween jack-o’-lantern is inevitable. Other methods of representing the beloved vegetable might complicate the existing collection of emojis. Additionally, the 2015 release helped users to find an emoji that instantly reminds them of Halloween. 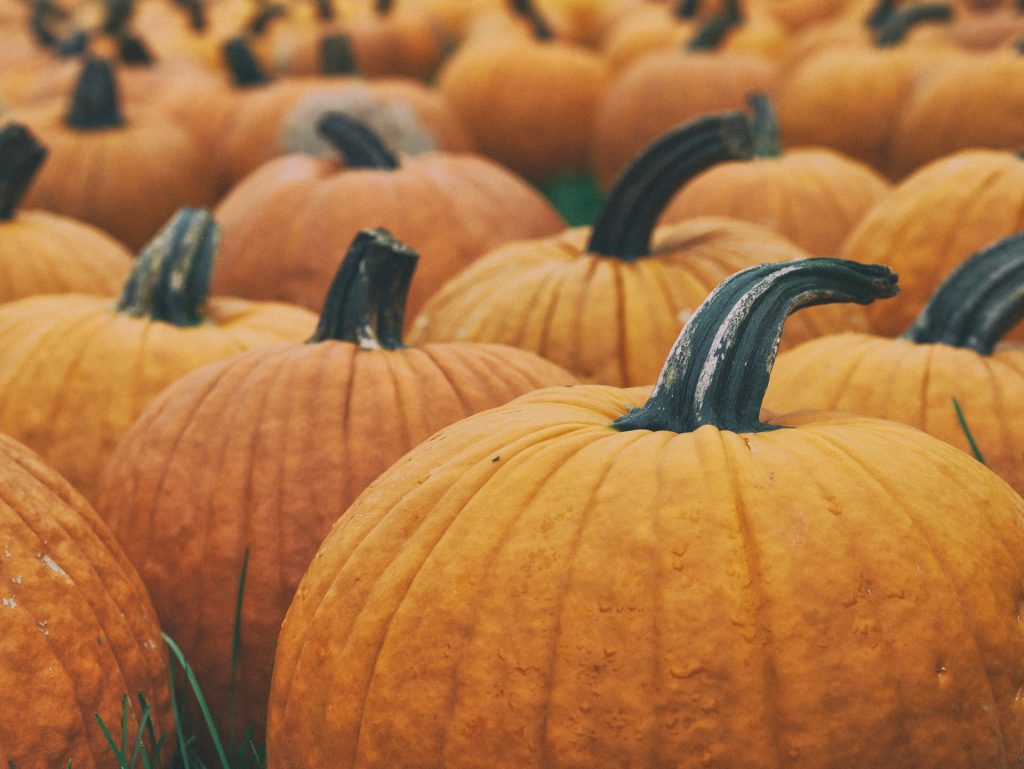 At first, people barely linked Halloween with pumpkins compared to today. The Irish traditions changed all that when some emigrated to the USA. Based on the Celtic festival of Samhain, both the dead and the living encounter each other for a whole night. Spirits roamed the earth on the eve of October 31. For protection, people built sacred bonfires and wore costumes to ward off ghosts. Ultimately, this led the Irish to incorporate their tradition of carving jack-o’-lanterns to keep Stingy Jack’s soul from haunting their homes.

The mixture of European cultures and folklores heavily influenced the Halloween traditions we know today. Despite not having any known origin, the phrase « Trick or Treat » became popular after a comic strip from Disney. Additionally, the popular Donald Duck and his nephews Huey, Dewey, and Louie starred in the short cartoon.

How Did ‘Trick or Treat’ End up With Pumpkin Baskets? 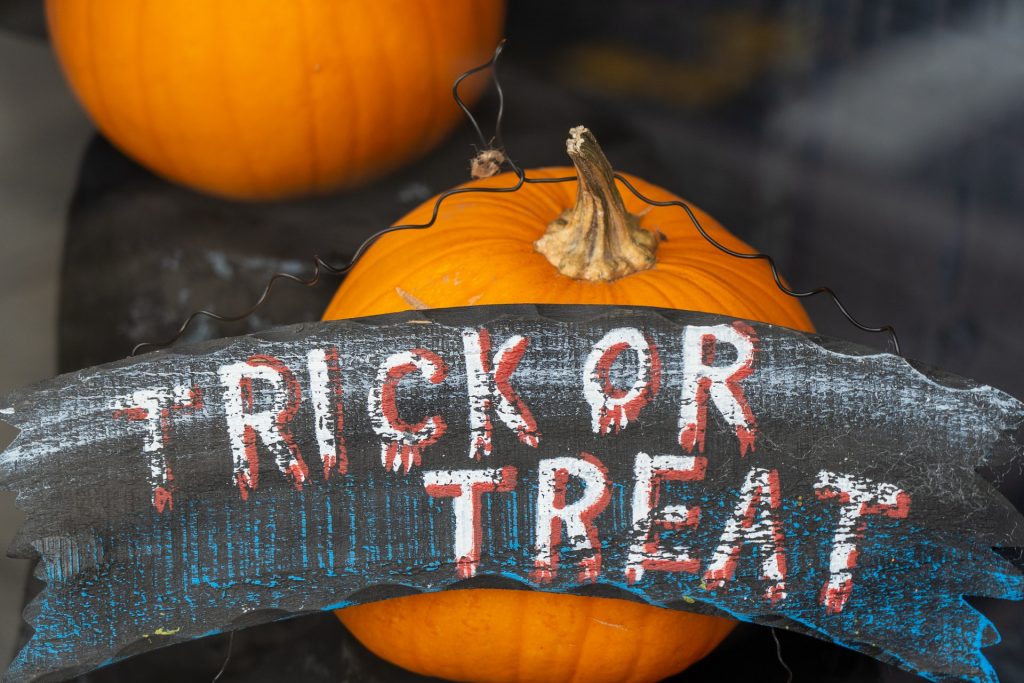 The habit of dressing in costumes while carrying baskets for candies originated from Guy Fawkes Night. Also called Bonfire Night, the celebration marked the failed attempt of the Gunpowder Plot. The movement initially aimed to blow up and kill England’s King James I but failed. During the annual festival, children wore masks and carried effigies while begging for alms.

In the present, the effigies turned to jack-o’-lantern baskets and the simple masks became more elaborate. In the end, the combination of Hallow’s Eve traditions led pumpkins to become an automatic reminder of Halloween.

« Halloween » Pumpkin: From Films to Emojis 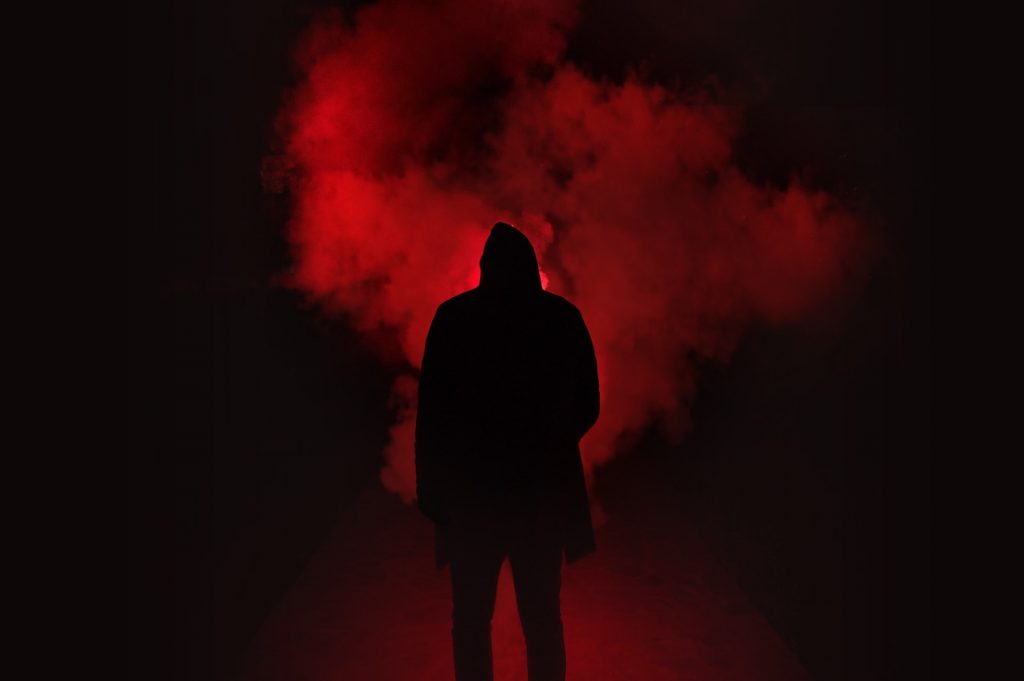 If a friend asks you to summarize the slasher film « Halloween » using emojis, you’ll probably send this set of emojis that include the creepy jack-o’-lantern. The franchise has produced 11 films since the first installment’s release in 1978. 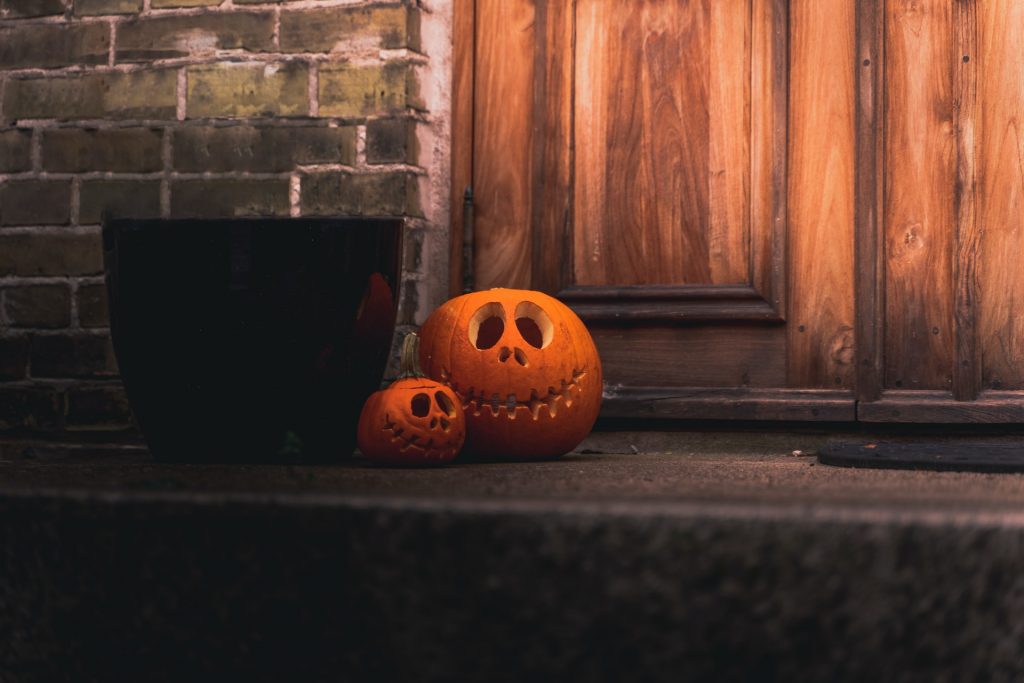 Another popular movie reference comes from the beloved Wizarding World. People often include the pumpkin when describing « Harry Potter and the Chamber of Secrets » using emojis. Among all the magical films, the second installment highlighted the significance of Halloween in Harry Potter’s life. Because of this, fans of both the books and the movies associate the animated jack-o’-lantern with events in the Chamber of Secrets.

One of the promotional posters for the Disney film « Halloweentown » features a familiar-looking pumpkin carving. Due to Disney’s reputation, the kid-friendly film’s plot is more playful compared to the gore incorporated in most Halloween or witch movies. The film’s jack-o’-lanterns also look like the grinning squashes from Facebook and Samsung keyboards. Both emojis may be entirely similar but the details mirror the features used in the posters.

Nowadays, you can easily find a selection of Halloween-themed films on any streaming platform. With this, it’s easy to plan a spookfest with your friends no matter where you are in the world. We suggest you start a vote using emojis to describe the plot of the films you hope to watch. Here are a few sets of emojis you can use: